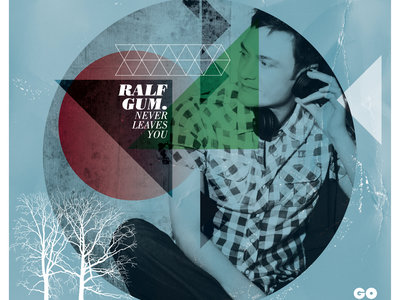 Comes in a lovely digipak / europak.

As a preview here is not possible, please open the soundcloud link in a new tap to take a listen: soundcloud.com/ralf-gum-gogo-music/ralf-gum-never-leaves-you-preview

"This is head and shoulders above the rest of what others call house music." SoulM8

"You'll ignore it at your peril!" Soul and Jazz and Funk


Ralf GUM proves again with his new album that there is constancy – and consistency - to be found in this fast-moving world. His sound became an instantly recognizable trademark during the last two decades, as it cuts through the airwaves and clubs sound systems with unique class and style. “Never Leaves You” is testament to the fact that Ralf GUM has stayed true to his roots and his particular, well-honed style. Never one to skimp on the perfection of his arrangements, or sacrifice artful production to follow the latest trends, this album is his opus.
Since the start of Ralf GUM’s musical career, he’s tirelessly praised the importance of real songs, as opposed to simple, dancefloor-oriented productions and his new outing is homage to “the song”. While many categories and styles could be foisted on it as a description, “dancefloor soul music” is probably the best summation of the long-player. Featuring an extensive list of top musicians, the music on the album is far from the average programmed dance “track”. And the impressive list of vocalists on the record means that, while it’s absolutely dancefloor-relevant, it’ll also warm the hearts of home listeners.

These vocalists include some huge-hitters, such as two-time Grammy Award-winning British R&B and soul singer Caron Wheeler, who gained fame writing and singing the lead vocals on two of Soul II Soul’s biggest hits, "Keep on Movin'" and "Back to Life (However Do You Want Me)". Her collab with Ralf - entitled “So Good” - is her first ever real House track and is evidence of her outstanding talent. Monique Bingham (with whom Ralf recorded “Kissing Strangers” in 2008 – the best-selling house track of the year on Traxsource) proves on “Take Me To My Love” that she’s still the first lady of deep lyrics in House music, while Oluhle (who was born in Zimbabwe and won the Zimbabwean Achievers Award for Best Female Artist in 2011) really makes her presence felt in such royal company. Ditto Canadian Jaidene Veda, who’s already seduced a number of heavyweight producers and countless listeners around the globe with her breathy voice.
The male faction of singers includes “the voice of house music”, Robert Owens, who features on “Fly Free”, the first single taken from the album which was a huge hit on download charts and playlists across the planet. Furthermore, “the king of Gospel House”, Kenny Bobien, contributes two songs to the album, and Kafele delivers his second joint outing with Ralf, following their highly successful 2010 release “Complicated”. In addition to these, Ralf GUM has recorded with one of France’s finest voices Jocelyn Mathieu, who gained fame for his releases on Vega Records and collaborated with highly talented soul singer, Jon Pierce. He completes a list of sterling singers that just prove Ralf’s relevance as one of the most sought-after international soulful house producers.
Ralf GUM has been producing music since 1993 and worked with many notable artists such as Inaya Day, Beady Belle, Michael Procter, Wunmi and Concha Buika among others. He has released on and remixed for top house labels like Mn2S, Papa Records, Peppermint Jam, Tommy Boy, Defected and more. In 2001 Ralf embarked on the development of his own record label GOGO Music. With his label work, Ralf has been pivotal for the international breakthrough of artists like Raw Artistic Soul and Black Coffee, as well as discovering many other outstanding global talents, building an outstanding repertoire of music. In 2008 Ralf GUM unveiled his long awaited debut album titled ‘UnitingMusic’ to great acclaim, which was called “simply one of the best albums of the year” by M8 Magazine. As a DJ Ralf has performed all over the world from his early residencies in Germany to massive events at Miami WMC, Southport Weekender UK to Ibiza, Japan and beyond! Now residing in South Africa, Ralf is one of them most popular DJs and artists on the motherland’s scene, boasting a DJ diary that is consistently full.

‘Never Leaves You’ showcases the growth of Ralf GUM, who has never compromised and never left his signature style. Ten songs in which there’s so much tohear and feel. The music abounds in soul; it’s jaunty and deep simultaneously. Combining traditional and contemporary elements whilst still being futuristic, this album is well crafted enough to “Never Leave You”.

ships out within 3 days

Ralf GUM’s music career dates back to 1990 when he started out as a DJ before establishing himself three years later as a full-on institution within the deep house scene, recognized in destinations throughout Europe, Asia, the Middle East, America and South Africa. ... more